I have been collecting conclaves since attending my very first conclave in 1972, at Camp Chief Logan. This was the last Area 4F conclave. I have been hooked ever since. This site will be helpful to those wishing to collect Ohio and West Virginia conclaves. While I have posted many images, there are many more to come. I also need images. If you have one I need, please email it to me at: hytone416@hotmail.com.  Also, if you wanna trade me something I need, please email me. 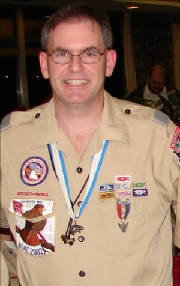 I grew up in Southern West Virginia, in troop six, in Beckley, WV, in the  now mergered, Appalachian Council. I became a member of Hytone Lodge 416 in the  spring of 1972 and sealed my brotherhood in the order in 1973. I was elected lodge chief of Hytone Lodge at the Winter Banquet in 1975.  Later that fall, I would be selected as Section Chief, of Section EC-6B for 76-77. I became a Vigil Honor member of Hytone Lodge in 1976.  I was a charter member of  Chi-Hoota-Wei Lodge 617. The lodge is a merger of Hytone 416, Adjudimo 210, and Wachu  Menetopolis 475. I was the first Lay Advisor of Chi-Hoota-Wei Lodge.  I  i am now a member of the new Takhonek Lodge 617 which is a merger of Chi-Hoota-Wei ,  Thal-Coo-Zyo 457 and Nendawin 618.  I have attended and served on  the staff of several NOACs and many Jamborees. I  have been  on the Jamboree staff of  QBSA Radio  four times and at the 2013 Jamboree this summer, I was the host of the QBSA Morning Show. The Summit Jamboree site is 5 minutes from my hometown of Beckley, West Virginia.
I am a 1982 graduate of Glenville State College with a degree in Biology and General Science Education. In 2008, Discovery Education and the 3M Corporation named me America's Top Science Teacher. That same year, I was named the Glenville State College Alumnus of the Year. I am currently a retired science teacher from Mount View High  School in Welch, West  Virginia. I am a past President of the West Virginia Science Teacher's  Association.  in the Summer of 2019 I will attend the World Jamboree as an Assistant Scoutmaster. I am also a member of the West Virginia Legislature. I currently represent McDowell and Mercer Counties in the House of Delegates.

I also enjoy Amateur "ham" radio. I hold an Extra Class license. My call  is WV8ED. I can be found on www.qrz.com by looking up my call.

At the 1977 NOAC,  I went over to the Pre-NOAC  traderee. I really learned how much fun this hobby could be.  I have been hooked ever since. I collect West Virginia OA, West Virginia CSP / SAP's, and West Virginia  and Ohio Conclaves. I have a big big ole CSP collection gathering dust in the basement and I am a number collector for OA Lodges, just one of each, regular issues.

My year as Section Chief for EC-6B in 1977...Yeah it's a really tough piece!!! I was the section chief and I was only able to get one patch. It's the patch I recieved with my registration....GOT ONE TO TRADE????
Powered by